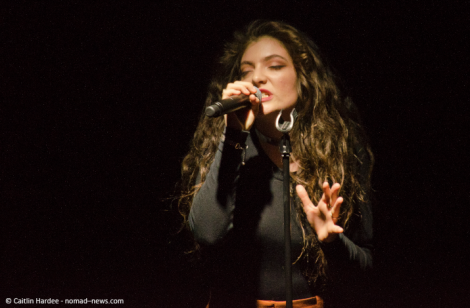 This is not Lorde’s first time in Berlin. Ten months ago, the Grammy-winning singer-songwriter played in the German capital for about 90 people, by her memory. Her first European tour was a sobering experience as the young, still-unknown New Zealander paid her dues on the road.

“I was deathly ill and I just hated it,” she says wryly on Thursday, May 29, onstage in Berlin’s Columbiahalle. A packed, diverse crowd of thousands gazes up at the 17-year-old vocalist. “Since then I’ve been all around the world, played in tiny clubs, huge venues, stadiums, award shows, and there’s nothing quite like coming back somewhere and looking out, seeing faces that are so kind and caring and bright,” she says, her voice wavering with feeling. “I’m so happy to be here, so happy to be playing for you guys.”

The feeling is reciprocal. The crowd roars. She seems undone by their adulation, vulnerable, her emotions raw and unpracticed. Can that be? After massive arenas, red carpets, chart domination with her debut album, Pure Heroine? It feels authentic, and it’s disarming. 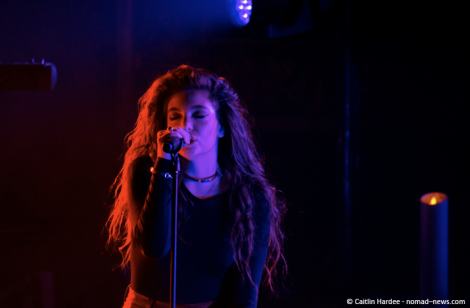 Before performing “Ribs,” Lorde pours out an anecdote from her songwriting process and her fears of losing the carefree ease of youth.

“I was 15 when I wrote this song,” she remembers. “I wrote it on a Monday, a couple days after my parents had gone away and I threw the biggest house party. You’ve seen ‘Project X?’ It was like a baby ‘Project X.’ When I finally crashed, my best friend and I were in bed and he was like, ‘Did you have fun? Are you okay?’ And I did have fun … throwing a party like that for the first time, there’s something exciting because it feels like you’re growing up. But doing something like that is scary as well. The fear of growing up wakes me up at night, makes me trip over when I’m walking. Everyone always talks about childhood, how that was the best part of their life, easy, no responsibilities – I don’t want that to go away. But when I am on a stage, Berlin, in front of you, I don’t feel scared. Because if this is what growing up is like … cool, it’s good. I’ll be fine. And I’m so, so lucky to have you, thank you so much.”

She asks the audience to get out their cell phones and hold them alight for the next song, and a field of stars appears in the darkness. 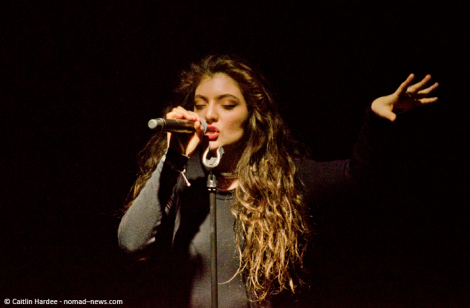 It’s not a prerequisite for a quality performance, but she really does impress with her ability to duplicate the vocal range and sound of her recorded material. While part of her fanbase may overlap with that of indie goddess Lana Del Rey, the younger Lorde’s strength in live concert seems more sovereign than that of the languid Del Rey.

While in the grasp of the music, Lorde is uninhibited, energetic, dancing in jerking, primal movements, fighting invisible demons, singing at times half upside-down through wild, neon-touched masses of hair — and yet she has the pipes and control to deliver studio quality and make it seem effortless. She is breathy in moments by choice, not by necessity, demonstrating that she also can bring the power and the full-bodied chest voice. She uses pre-recorded backing track vocals heavily on some songs, but the raw power and flexibility in the top layer is all her. 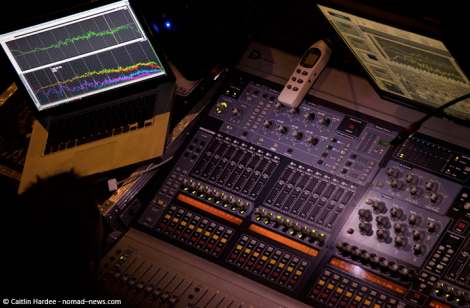 Bird’s-eye view of the soundbooth. Props to the engineer for the clarity of vocals in the mix.

Lorde’s live setup is fairly minimal – vocals, keys and drums are all she needs. A few strategically placed lights, a chandelier and three massive, empty frames behind her two-man band round out the visuals. Her drummer consistently kills it, setting a serious pace on the kit. Thundering percussion and screaming lines of synth in the interlude of “Easy (Switch Screens)” catapult her expressionist dancing to new frenetic heights. 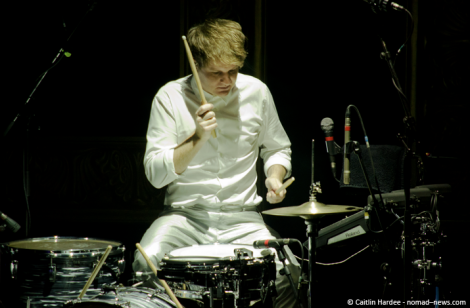 The show closes out with three of Lorde’s biggest tracks, “Royals,” “Team” and “A World Alone.” After vanishing during an instrumental, the star comes back out for the last part of “Team” draped in a molten metallic gown with a flowing cape. Now she looks literally radiant, in a costume that somehow transcends gaudiness or the shelter of irony and becomes a poignant piece of performance art. The defiant fantasy of grandeur brought to life – she is a queen onstage, a sculpture of rippling light. She sweeps a graceful, full bow between songs, golden sleeve flaring out like a gilded butterfly wing. Nothing short of majestic.

Photo Gallery:
The photographers were shooting from the FOH position (front of house, commonly by or above the soundbooth at the back of the crowd), which made for challenging conditions compared to the mobility and ease of close-up shots in the typical position between the stage and the crowd. Still, we had a great view! 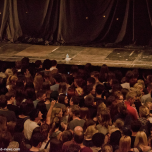 Bird’s-eye view of the soundbooth. Props to the engineer for the clarity of vocals in the mix. 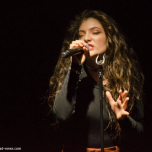 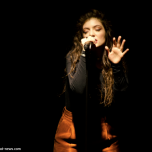 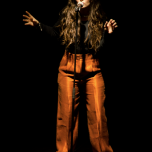 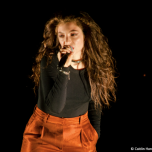 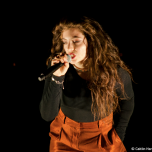 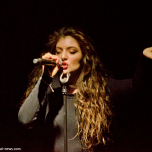 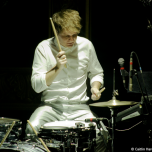 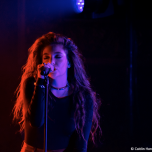 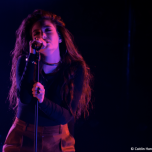 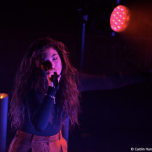 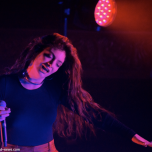 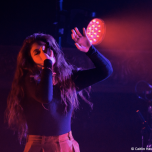 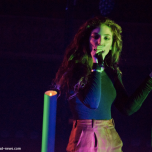