Folk-bluegrass supergroup I’m With Her are playing their first show in Berlin, and they’ve already discovered the nude sunbathers in Tiergarten. That feeling, lying around hedonistically under the trees, is pretty much what the song “Ryland (Under The Apple Tree)” is about, they tell the crowd. “Just wanted to put the thought in your head . . . here in this crematorium . . . I don’t know, felt like the mood was pretty sexy,” deadpans Aoife O’Donovan. The audience cracks up.

Silent Green Kulturquartier indeed has a more varied history than most music venues. The small concert space, with less than 200 seats below and two balcony tiers above, was once the mourning hall of the crematorium complex, which still borders on a quiet, verdant cemetery. But now the monument-protected buildings are dedicated to art, life and the enjoyment thereof. When I show up, the band members are having a casual open-air dinner in the restaurant garden outside the hall.

O’Donovan, Sara Watkins and Sarah Jarosz are touring with their debut album together, See You Around. All three have established illustrious reputations and discographies as versatile multi-instrumentalists and gifted vocalists in other musical constellations. The seemingly effortless meld of their collaboration with each other translates perfectly to a stripped-down stage setup. One large diaphragm studio-style basket mic, the three of them clustered around it, just the way they recorded. Thanks to the fabulous acoustics of the intimate, vaulted space, every note and every breath carries.

They trade vocal roles, now two, now three in the mix, now Sara moving to vocal lead, Sarah and Aoife sliding around the melody with unearthly accompaniment. The song “Wild One,” populated by ghosts and ashes, full of somber warnings against flinging oneself into death or a strange unknown, penetrates the heart in this setting with particular keenness. When Aoife’s vocals move to the center of a subsequent arrangement, she brings a different quality of angelic sound – where Sara’s tones flow smooth like maple syrup, high and with a certain girlish sweetness of inflection familiar to Alison Krauss fans, Aoife has slight edges of smoke, so that her voice seems to flutter between airy rafter heights and moments of earthbound roughness, injecting perhaps not grit, but a certain dust-tinged conjuring of the road.

Even as the vocal balance shifts on every song, so do the three cycle between instruments. On “Crescent City,” Aoife and Sarah are both on guitar, Sara’s fiddle singing wild and piercingly sweet. On “Ain’t That Fine,” Sara switches to uke. Their flexibility makes it impossible to pigeonhole the band into any one genre – they can do old-school gospel, frenzied bluegrass, dreamy modern folk, traditional folk, Eddie-Vedder-style acoustic vagabond music, pretty much anything you can think to do with a fiddle, a ukelele, a banjo and two guitars. “Got a story, a dotted line,” they sing. Theirs are the songs of seeking, movement, uncertainty, searching for one’s place in the world… or maybe that’s just what I hear in them. The wanderer, consigned to the winding road, hunting out oases of peace. 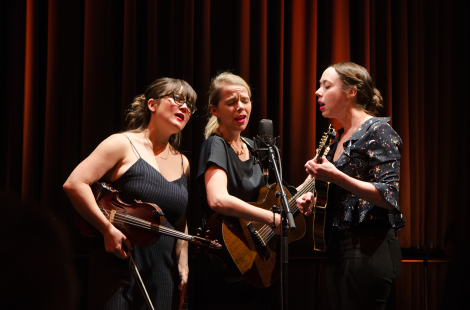 I’m With Her at Berlin’s Silent Green. Fiddle, guitar, mandolin.

The trio is met with rapturous welcome by the audience, cheering and laughing giddily at their commentary but utterly silent during the songs, perfectly balanced vocals hanging in the hushed space. Aside from their album, they play a few covers and adaptations, like Jim Croce’s “Walkin’ Back To Georgia,” an exquisite rendition of the traditional gospel hymn “Lord, Lead Me On,” Vampire Weekend’s “Hannah Hunt” and Nina Simone’s “Be My Husband” during the encore and a song from Aoife’s own discography, “Hornets.” The Tiergarten-vibe track “Ryland (Under The Apple Tree)” grew out of a melody written by the guitarist Julian Lage, to which I’m With Her wrote lyrics. The result is devastatingly sweet and lazy, with aching soft vocals, finger-plucking guitar notes, swift-trembling mandolin and slow-sliding fiddle, the guitar anchoring the piece with building resonance and depth. The three craft a musical blanket of the loveliest lassitude to stretch over lush velvet grass in sun-dappled tree shadows. It is the unhurried essence of resting with a lover in the kind lap of life.

The mood turns dark again on “Pangaea,” in which Sarah’s more haunting, sonorous vocal stylings move to the forefront. “What’s left, when the ground cracks, and the sky’s black,” they sing in eerie harmony, Sara’s voice a high-flying bird soaring on the edge of a thunderstorm, Sarah bending desolate notes to shape a twisted aural landscape, the shattered primordial continent standing in for an irreparably damaged relationship.

The wintry vibes continue with an anecdote from the writing of the album. Back in December 2015, I’m With Her were headed to a house in Vermont for a songwriting session. In a lousy rental car, they got stuck on a dark, icy hill. “We thought it was the end . . . it was dire for like 20 seconds,” relates Sarah. “Then from over the hill in the darkness came a mountain man.” The audience sputters with laughter. “Luckily he was nice.” The resulting song about getting back to the highway, “I-89,” has a funkier vibe, Aoife on guitar and Sarah on banjo, strumming in sync. With “Close It Down” comes a melancholy reflection on a doomed love affair, without the lurking dystopia of “Pangaea,” sweet but resigned and sad.

Lightening the atmosphere, the ladies dive into “Waitsfield,” a frenetic instrumental, hopping always faster and faster to an abrupt end and then triumphant laughter. On “Overland,” they get the audience to join in, voices resonating on the chorus. “Goodbye brother, hello railroad, so long Chicago, all these years, thought I was where I oughta be, but times are changing, this country’s a-growing, and I’m bound for San Francisco, where a new life waits for me…” Beautiful. That feeling for which the English language has no word: Fernweh. The opposite of Heimweh, homesickness. The under-the-skin longing, painful and intoxicating and delightful, burning in the heart and gut, for far-away places, travel, change, the unknown adventure. Mixed with the already-felt nostalgia for the loved people and place about to be left behind. Wanderlust amplified a thousandfold. It’s a feeling I carry no matter where I am, and I know the sounds of I’m With Her are going to be joining my soundtrack of life for a long time to come.