This pandemic takes from us in so many ways. Loss of life, economic destruction, goals sidelined, experiences cancelled and delayed. Massive loss, minor loss. There’s a reflex to name one’s privilege when complaining about how much this all sucks, which is just as well, because we see in the form of the assholes protesting with guns and ineptly worded signage what happens when people lose sight of their privilege. Many of us have shelter and are not financially drowning – which isn’t to say that this doesn’t have far-reaching financial repercussions for pretty much everyone, with income and opportunities lost. We and our loved ones are hopefully staying physically healthy, which is the paramount thing. But all this is still awful, and that’s a valid truth to name. 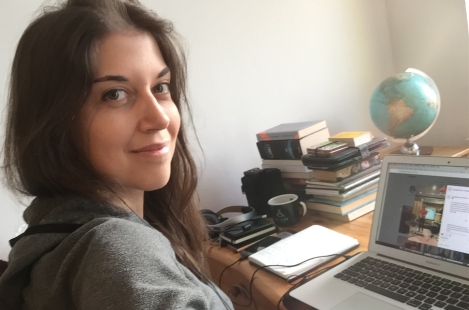 Trying to stay positive but really not okay with this entire situation.

So here is the thing that most unmoored me the last couple weeks: not the weirdness of home office or the constant doom-scrolling through newsfeeds or the surreal reality of wearing masks in a world that, on the surface, looks more or less normal. Rather, as anyone could have expected, Air France finally got around to cancelling the trip I had booked before all this madness, to travel from Berlin to Seattle for three weeks at the end of May and beginning of June.

It was a trip I probably shouldn’t have taken anyway, with travel restrictions and lockdowns and mandatory self-quarantine upon return and not wanting to endanger my family, though had it been possible, I would have been beyond careful. If you’re planning to harp on that point, see yourself out, it’s now moot. But see, as long as they didn’t cancel it, over these last months I had a point of light, something to look forward to, a bit of hopeful joy to dispel the monotony. When it was finally off, the full force of uncertainty regarding when I’ll be able to see my family again descended, and I felt more trapped in my now-tiny world than ever.

That hollow, leaden feeling lasted a couple weeks, while I reoriented myself and painstakingly communicated with Air France’s customer service team (they’re swamped). Commendably, they have now rebooked me at their own initiative and without any additional costs for a two-week trip in early July. Who knows what will be happening in July; maybe I’ll have to go through all this again. But for now, I have a new goal on the horizon to move towards.

Nonetheless, I’m going to spend a few more moments indulging in my own relatively small problems and naming the nature of things lost. I read an interesting piece the other day about liminal space during the pandemic. We are all waiting for Godot – in the psychological equivalent of a hallway, a deserted truck stop, a lonely parking lot at night, an alternate plane of reality. In-between spaces, in which things feel surreal, some experiences are postponed and some are lost completely – though the difference between the two is sometimes misunderstood. Perhaps I will have two weeks in the Pacific Northwest in July with my family, and that would be a joy. But the journey meant for May will never happen as I planned it. Even if I scrape together all of the various elements at various later points in time, that exact experience at that moment in time has been taken from me, and we don’t have an infinite amount of time to fill with experiences on this earth. Time lost is time lost.

Step into my imagination – here is what that trip would have been like.

One year ago, I was just finishing up my first six months in a new job. It had been a hard-charging half a year, with a steep learning curve and a ton of exciting new challenges, and I was so ready for a break to savor that success and recharge in the midst of nature.

Conveniently, it was a beautiful time in the Pacific Northwest, the perfect midpoint between lushly verdant and sunny, the reason May has always been my favorite month. My family and I ensconced at our homestead in the woods, where things were both reassuringly, in their essence, much as they had always been, and also progressing in the form of some projects. For instance, the ponderously growing deck: my dad had laid the basic structure of the new portion of deck on the downhill side of the house. Where there had always been a doorway to nothing, there was now a narrow catwalk to stand and a framework defining where there would someday be a sprawling, spacious deck extending into the trees. My dad and I sipped coffee and looked at it, and he said: next time you visit, we’ll be able to play music out here.

I fixed that in my mind and promised to be back in a year. We’d meet in the interim, as we often do, elsewhere – down in California in late November, to catch up with my sister and her fam. But I’d be back in May, and the fresh joyous light would filter through the unfurling forest, and we’d drink coffee and play music on the deck. 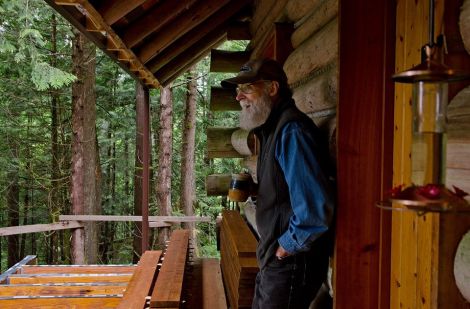 Coffee on the deck.

When it came time to plan my trip in detail, other dreams flooded in. I had taken a tiny solo roadtrip last May in the PNW, had kayaked in Bellingham, hiked in the North Cascades, noted a beautiful campground to return someday with friends. I decided: I’d have two weeks with the family and a week on the road, either with myself or with buddies. I started reaching out to friends both in Berlin and stateside, started gathering a sense of who might like to join for some camping and hiking. I pored over maps, defined the route I would take – back up through the North Cascades and over the border into Canada, up past Revelstoke and ultimately all the way to Banff National Park. I read detailed hiking trail information, noted the routes I wanted to tackle, found a beautiful fire lookout atop a peak to sleep in one night, researched campgrounds and permits and fees. I visualized the drive in my mind, all the glorious places we would go. And I coordinated with my sister to make sure we’d all have a few days at the homestead together.

When the plan had coalesced, I blocked the three whole weeks for the trip, cleared it with work, found insanely cheap flights and booked. There were still details to pin down, but I’m a damn good travel agent, if I say so myself, and I could see it so clearly in my mind, the joy tangible, no doubt that it would come into reality as intended, like so many trips in the past. That was the May trip, for which I should be leaving in two weeks.

That trip will not happen. Distancing is still in place and will continue. The border to Canada is sealed. Parks are shuttered, trailheads closed. Roadtrips with friends are off the table for the foreseeable future. If I am lucky, maybe I can see my family in July. Maybe we will play music on the deck. Maybe we can get out for a hike closer to home.

Maybe further down the road I will do each and every one of the things I had planned for the original trip. I hope and intend so. But the thing I conceived will not happen as I meant it to, at this point in time. And time is not infinite, for us. There’s an ache in my chest for the world so freshly lost, in which I would simply hop on a plane 14 days from now, without a care, and go enjoy three weeks of bliss with people I love. For the sense of total freedom and control over the path of my life – illusory or not. I miss that world. I hope we can rebuild something like it before too terribly long.

Stay safe and be kind to yourselves. These are rough times.