“Stop the Dog and Cat Consumption in Korea” is a Facebook group devoted to battling dog and cat consumption in Korea. It currently has 14,329 likes and I am not one of them. I was blocked from the page, after I shared a good blog post about dog-eating in South Korea. “Ask a Korean” is one of the most well-known blogs on anything Korean, and The Korean (as the blogger calls himself) has been cited in The New York Times, The Guardian, Wall Street Journal, Sueddeutsche Zeitung and more. Sometimes his blogs are slightly longwinded—okay, his post “Dog—It’s What’s for Dinner” is seven pages long in Microsoft Word—but they’re well-researched; and naive little me, I thought The Korean would be helpful to the angry activists. I guess the angry activists weren’t too pleased about my help. 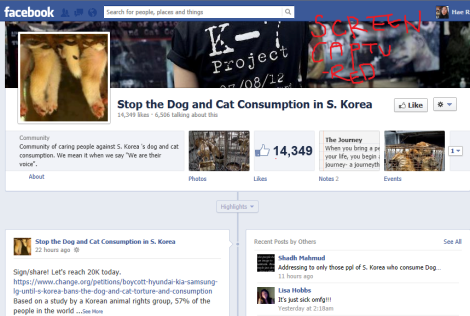 In all seriousness, I feel his annoyance. It’s that twinge of annoyance when certain uptight vegetarians tell you to stop eating meat, or when your mother tells you to stop seeing the dude that doesn’t meet her standards. It’s that annoyance at good intention with no sensibility. You mean well, but you don’t always know what you’re saying.

Here is my point: hey Anti-dog-eater, what’s up. KNOW more about whatever makes you angry. Here are some things to help you along, because not everything I say is barbaric and backwards, even if I am Korean myself. Sometimes primitive people can have insight too!

Dogs as Food: A Brief History

It’s not clear when wolf met man and became dog. A 2009 New York Times article suggests that dogs were first domesticated in southern China for meat; the newspaper’s 2010 article refutes this theory and attributes the first dog domestication to the Middle East some 15,000 years ago; and a 2012 article argues that dogs’ genetic roots are more obscure than ever. Regardless of the origins, dogs have been around for a long time, for friendship and for protein.

Here’s some dog-eating history in Korea in bullet points:

Dog meat has high levels of protein and one sixth the amount of fat that pork does. It tastes the most similar to goat meat and is usually steamed or brewed.

It’s no empty stereotype: South Korea is a dog-eating country. A 2006 National Assembly survey estimates that two million dogs are consumed annually; the dog meat market makes approximately 1.4 trillion won per year, or about 1.2 million dollars. Dogs are the fourth-most consumed animals after chicken, pigs and cows. 55.3 percent of all adults have tried dog meat and 75 percent of Koreans are in favor of eating dog meat.

Strangely enough, dogs are not legally classified as livestock but are still legal food. In 1984, four years before the Seoul Olympics, dogs were omitted from the Livestock Processing Act, which regulates how livestock are raised, slaughtered, processed, sold, etc. But the Korean Food and Drug Administration acknowledges dog as food, which means it’s legal to eat it. For example, dog restaurants get the same tax treatment for purchasing dog meat as pork restaurants.

Needless to say, this ambiguity creates a lot of problems. Nothing legally inhibits the people from eating dog meat, but what they’re eating isn’t legally regulated. According to “Ask a Korean,” many dogs are raised under cruel (and unsanitary) conditions because dog meat sellers try to maximize profit. Dogs are raised in small cages, fed whatever, and usually electrocuted, like cattle, before being shipped to restaurants. Electrocution is more common today than hanging the dog and beating it to death—which was thought to tenderize the meat—because electrocution gets the job done faster.

“Dogs cannot be neglected as ghost meat any longer,”said Giho Song, author of “The Delicious Food Law Revolution,” a comprehensive analysis of South Korea’s food law and history. Hongshin Kim, a National Assembly member and an advocate of a bill pushing to include dog as livestock, agreed. “We must think about the consumer’s health,” said Kim.

Legally regulating dogs as livestock would also improve the dogs’ lives—the little they can have under the grip of hungry, civilized humans —because their living conditions would become more humane. According to “Ask a Korean,” unregulated dog meat is a human health hazard and creates hardship for the dogs.

Hey Anti-Dog Eater, if you really want to stop dogs’ suffering, you need to set your mission straight. You criticize that South Korea’s “sickening practices have no place in the modern world.” Do you mean the practice of eating dogs in general, or the practice of treating them like shit? If the latter, then it’s great criticism, because no animal deserves to live like McDonald’s livestock.

If your criticism is the former, then you’re just being a cultural prick. How hard is it to accept the idea that some people don’t think of dogs as their best friends? Is it so criminal to think like this, that dogs could be tasty? People have enjoyed it for years; there are no health hazards; and nobody’s endangering the environment. What are they offending, except your own prejudices of what’s “civilized” and “barbaric”?

“Ask the Korean” has an interesting point. The Korean states, “Ironically, the greatest obstacle to regulating the processing of dog meat in Korea is not the dog meat restaurateurs . . . but the opponents of dog eating.” Anger from anti-dog eaters and their fear that dog meat might be legalized stops the policy-makers from actively changing the dog meat industry. But what does “legalization” mean in a country where dog-eating is already an accepted reality? And does such a reality mean that all those involved are uncivilized?

Consider this: in 1857, colonized Indians called the British “barbaric” because the Brits lubricated their rifles with tallow, or cow fat. What did the British say to this? Well, about 20 years ago, the British accused the dog-eating Filipinos of barbarism. The Minister of Foreign Affairs in the Philippines termed this in the same words as the British response from 130 years ago: “A form of racism that refuses to acknowledge cultural differences.”

P.S. On the website of the Korean Food and Drug Administration, “Dog Meat” yields no search results. Neither does “Boshintang” (Dog Broth). Is dog eating a ghost practice, even in the organization that supposedly acknowledges it?

P.P.S. My blog post is only three pages long on Microsoft Word (Font 11).

2 responses to “I Got Censored By Anti-Dog Eating Activists…”