At the end of August, two days after a nightmarish appointment at the Ausländerbehörde, which only created further uncertainty about the state of my visa, I moshed all my stress out at a Green Day show, dancing exultantly and screaming along as the rain soaked us all.

Although they didn’t play it that night, it’s fitting that one of my best-loved Green Day songs is “Wake Me Up When September Ends.” This September turned out to be a bizarre limbo land, torn between the frantic desire to experience everything in case I was thrown out of the country and the conflicting refusal to consider deportation. I ended up in a strange floating dreamlike state, afraid, defiant, in a fog of numbness rent with the intense and inescapable sensory experience of the place I loved too much and might not get to keep.

One month after the unsettling appointment and two days before my official departure deadline, my visa was approved. September 28, 2012—a day of triumph and release. How did I respond? By waking up and celebrating in true Berliner fashion, of course.

White Trash Fast Food, Schönhauser Allee 6-7.
That Friday night was a whirlwind, going from drinks in a friend’s apartment to the club, restaurant, tattoo studio and music venue White Trash Fast Food. Staffed by friendly and relaxed doormen, this multi-purpose nightlife location presented conflicting impressions. I found the restaurant upstairs to be an unappealing combination of American dining stereotypes. Ostentatiously ornate wooden furniture and a hodgepodge of Eastern decorative influences are garishly juxtaposed with red and white checkered tablecloths and bits of Wild West saloons. It feels like Buffalo Bill trying to run a tiki bar for truckers in a former Chinese restaurant.

This is all deliberate. In the management’s own words, WTFF offers “Berlin’s best steaks plus German-Asian-Mexican-French-Swiss-Army Fusion, with guitar. With our international cuisine, the irony is complete. Let’s take a look behind the surface, of the double negative, ‘White Trash – Fast Food.’ Hey! You may say, on first glance, that’s no name for a restaurant, and you my friend, would be correct!” This place is a conscious blending of American tackiness with Berliner hipster irony and self-mockery, and I admire their irreverent, easygoing spirit. However, having experienced entirely too much of and finally fled the tackiness of America, I did not find this greasy, reheated, hashed-up diner style charming.

The basement, however, was an entirely different story. If upstairs serves tourist trashiness on a tin platter, downstairs delivers underground in the flesh. Fashioned to look like an actual cave, the dancefloor, stage and bar are smoky, dark and grittily seductive. The adjacent tattoo studio offers added diversions. They were cranking immensely danceable indie tunes when we arrived, which quickly transitioned to a live punk band screaming songs about Mitfahrgelegenheit and a beautiful shopgirl in Neukölln. Good work, Berlin.

However, our night wasn’t over—friends on the way to us changed their minds and decided they needed some techno music. I was feeling the electro urge myself, so we climbed back out of the depths of White Trash and headed to…

Weekend, Alexanderstraße 7.
We were lucky to randomly end up at Weekend on Ministry of Sound Night, with residents Junior G and Sheldon from the legendary London club. The view over Alexanderplatz was stunning as always, although sadly, the end of summer meant the seasonal closing of the roof terrace. Nonetheless, the atmosphere was pumping on their main floor. Two things have never disappointed me at Weekend: the club itself, nicely appointed and perched over the city, and the excellent booking policy.

For those reasons alone, it’s a club you need to experience at least once. Unfortunately, everyone and their bachelor party thinks the same thing. Weekend deals with the same double-edged fame as other top-ranked clubs like Berghain and Watergate, with the difference that they don’t seem to do as well at filtering out obnoxious, overdressed, girl-hunting, techno-clueless tourist types (locally and unaffectionately known as “Proleten”) at the door. This results in rather unpredictable nights, where one minute you’re exuberantly dancing in a fantastic mix of like-minded EDM fans, appreciating the DJ and the vibe, and the next minute you’re fending off some Touri in a button-down shirt who is completely unaware of the incongruity of attempting to bump-and-grind on your ass to a microhouse track. Despite these exasperating moments, I’ve no doubt I’ll be back, sooner or later.

Subland, Wiesenweg 5.
The next night, my flatmates and I were sitting around on our couch, trying to decide on a plan. Resident Advisor provided the usual range of helpful tips on who was playing where, which events were attracting the most interest from other Berliners, and cover charges. We were pleased to find two exciting new places to explore without spending any money on Eintritt. The Mini.Mal Elektrokneipe is incredibly close to our apartment, up at Rigaer Straße 31—even closer than our trusted hangout Süß war gestern. I’ll delve into detail on these charming, typisch Berliner microclubs and their sister bar, Zu mir oder zu dir, in a later Nomad Nightlife installation.

After a late start from our apartment and a lovely Aufenthalt in the Elektrokneipe, we traipsed on down towards Ostkreuz to explore the promising-looking club Subland.

I was so swept away with intense delight by the discovery of this club in all its glory. It’s about 10 minutes on foot from our apartment. It lurks inconspicuously in a rather dead area, nestled among warehouses on the edge of the Ring and the hinterlands beyond. You wouldn’t see it if you didn’t know it was there. But you would hear it—and feel it.

My pulse quickened as soon as the bass started throbbing through the pavement under our feet. Unmistakeable. We were approaching something worthwhile. Because the club was staging a protest night against the impending draconian GEMA tariff reforms, there was also no cover charge, just a request for a donation and petition signature at the door, which we gladly provided. Normally entry is a bit more here, ranging from 5 to 10 euros, which is still economical in comparison with places like Watergate, but the thrill of experiencing something magical, yet underground and on the cheap, added to my overwhelming satisfaction.

I’m sure Subland is widely known among dubstep and drum’n’bass devotees, but for whatever reason, it’s managed to stay out of the upper echelon of clubs as ranked on sites like Resident Advisor and DJ Mag, and had also stayed off my radar—until this little expedition. The club’s Facebook page explains their philosophy: “As the name suggests Subland is focused on Subculture and Bass fueled music, whether it be DnB, Dubstep or Techno, our heart and soul is in the sound.” They go on to explain that their particularly deserted (yet convenient) location offers them the added bonus of existing without sound restrictions. And unlike some clubs (ahem, ://about blank), they’re not confusing volume with quality. The club has this to say about their sound system:

“Within the Sublands you will find a sound system that is second to none and has been installed by the Bulgarian, family based company Clear Sound – A rig that is on par with ‘Funktion 1’ and probably offers more pressure than any other club in Berlin .. ‘The Beast From The East’… as it has been aptly named by many Subheads!”

Claiming par with the legendary Funktion 1 might sound like hype, but I can testify to the cerebellum-massaging effects of the Subland system. Without knowing anything about their gear, the second I set foot in the place, it felt like entering a warm, dark, safe, sweaty, smoky, beautiful, aurally orgasmic womb. I wanted to marry that club. Every vestigial shred of stress and tension that had been building in me over the past weeks of waiting was systematically unwound, defused, deconstructed, denatured. With like-minded people, all in their own zone of bliss, neither too packed nor too empty, we danced and shook and let everything out. Dreamy yet ecstatic dubstep in one room, frenzied reggae-dub in another, for an entrancing and varied experience.

Besides the great rig and excellent DJs, the club interior just looks awesome. In the main room, the DJ spins behind wire fencing, a setup which vaguely resembles the basement booth at Tresor. In the side room, the DJ is ensconced in a true little cage of a booth, festooned with pilfered signage and cozy orange light. Speaker stacks everywhere, of course. The club is filthy and gorgeous, with the requisite overstuffed furniture for relaxing Berliners in various corners. The bathrooms, charmingly, are plastered with odd Star Wars-inspired graphic art, and fittingly, the anti-GEMA party that night was dubbed “The Empire Strikes Back Episode 2.”

I’ll wrap it up before this reaches epic love poem proportions, but seriously, I will need to return to Subland imminently and often. What a wonderful place to lose oneself. 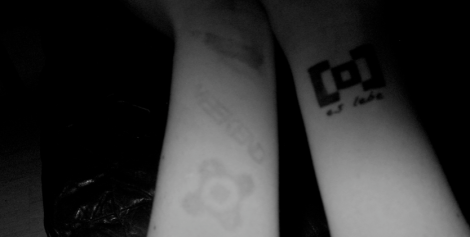 Marks of a love affair with the night: WTFF, Weekend and Subland stamps, Berghain tattoo.