I have a serious problem watching movies all the way through. Blame it on the insidious influence of Twitter and constant Internet exposure on our brains, insatiable hunger for trivial knowledge, or a well-masked hyperactivity disorder—if the film is under my control, I’ll be pausing every five minutes to Google some plot-inspired tangent, which often as not will derail into an epic self-guided webinar, cross-surfing links on Wikipedia for hours.

So it was tonight. Seven minutes into “Cairo Time” and I was already off Googling travel advisories for Cairo. This ancient metropolis has always been on my radar as a place I’d love to check out someday. All it took was a bit of exotic taxi music and the film’s speeding shots of chaotic, bustling streets to set me off again.

Of course, in light of the current political instability across the Middle East, my designs for Cairo have been on a bit of a cautious back burner. My dream scheme involves a trip starting in Cairo, sweeping over to Petra in Jordan for some old-world wonderment, then heading to Amman, possibly Tel Aviv, definitely Beirut, and finishing in Damascus. While Amman and Beirut are relatively tranquil, Damascus is obviously out of the question for now. But Cairo…

Disconcertingly, the US embassy site and Google News were brimming with warnings for Egypt, not just the standard precautions, but a specific and recent warning issued in regards to “credible information” concerning terrorist interest in targeting female American missionaries in Egypt.

This of course poses the question—should only missionary women be concerned, or Western women in general? Would an extremist wait to ascertain whether an English-speaking, foreign woman was an American missionary, or simply act?

Immediately after this concern occurred to me, I rebelled against my own mistrust and paranoia. I find it deeply regrettable that so many areas of the world exist in people’s minds as no-go zones, where all locals are hostile, all situations volatile, and all trips liable to end in kidnapping and execution. It just isn’t so. People are people all over the world, and most of them are decent and kind. These qualities are enhanced when you meet them with openness, trust and eagerness to learn. If you go expecting problems, you’re more likely to find them, or at least to prevent yourself from having a good time. And if you don’t go at all, you’ll never know.

It’s a tricky issue. I browsed numerous travel forums a while back while on a similar wanderlust kick for Tehran and its stunning architecture. Everywhere I looked, I found reassurances from seasoned travellers who had been there and were favorably amazed with the hospitality of the Iranian people, despite American-Iranian tensions at the top political levels. I want to believe that people from even the most disparate cultures can come together without strife, that individuals have a stronger desire for harmony than discord. I sometimes think of a remarkable, adventurous soul I met through Couchsurfing, an American expat living in Prague who called himself Diego Drifter. While I was surfing at his place with about ten friends, he recounted an epic story of a New Year’s celebration, when he and his 55 (!!) couchsurfers had gone across the street and partied with the North Koreans at their embassy. No big deal. Just like that.

The wheelings and dealings of governments and fundamentalist groups—what do they really mean for the average citizen of any given nation? We may hold wildly differing religious beliefs, culinary customs, dress codes and family structures—but under the assumed trappings of human civilization and culture, we are all animals, and a happy animal is an animal with food, shelter and a minimum of conflict. When poverty and violence don’t drive people to desperation, they are generally willing to compromise and show tolerance towards the eccentric ways of others.

And yet, the question remains, for Cairo and every other destination with a sketchy travel advisory. To go or not to go? I remember my mother worrying when I decided to travel to Morocco alone, in the spring of 2011. I scoffed and assured her that I would be fine. And I was. I had an extremely diverting, fascinating, safe trip. And one month later, the cafe where I met my guide was blown up.

I’m still not sure whether the incident proves her right, or me. Bad things do happen. But the odds of them happening to any one of us are generally still slim. And life is short in any case—too short to hide away from the beautiful world.

Cairo, you’re on my mind. 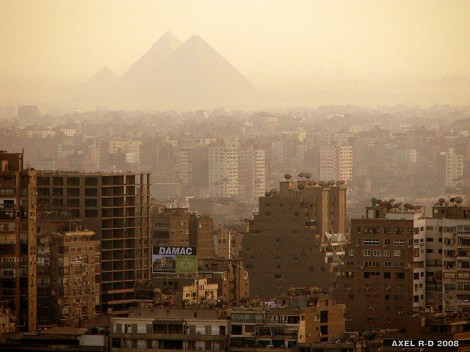