Berlin is a melting pot, a meeting of worlds. The city’s architecture is a prime example—old, stately apartment buildings, their raw brick corners gnawed by air bombardment, mingle up against drab Soviet-style concrete monoliths and sleek modern edifices of glass and steel. One need only look at the Hauptstadt’s most iconic structures to see the variety—the Brandenburger Tor is a classic, majestic work of Greek Revival architecture, the Fernsehturm was built by the Soviets as a symbolic spike driven into Berlin’s skies, the Hauptbahnhof is ultra-modern and the Reichstag is a blending of ancient and cutting-edge style.

Infinite inspiration for an artist, if one is fascinated by buildings. Daryl Alexsy, an American artist newly relocated to Berlin, certainly finds plenty of subject material for her work in the city’s diverse landscape. Alexsy explained how Berlin has helped to shape the evolution of her distinctive artwork.

“A lot of [my method] came from living here and exploring the city on my own, where I would go out with my sketchbook and just walk around till I saw something that I thought was interesting, and find a place to sit and draw it,” said Alexsy. “And that turned into, when I was producing my monotypes, I would take these sketches back to my studio and make them larger, and recreate them in ink. But a lot of it is just catching the experience of being somewhere, and how it feels to actually stand and look at it. I didn’t have a camera for the longest time, and so that was the only way I could really capture these memories.” 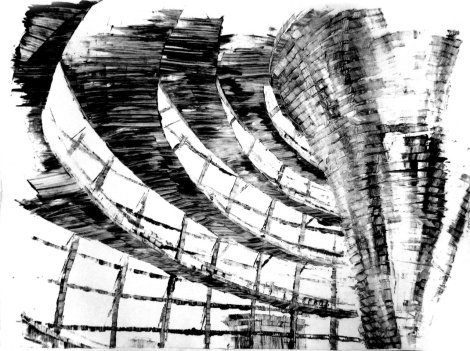 Alexsy has created much of her varied portfolio in the unusual medium of monotyping. She spoke about the technique, which requires elaborate equipment and a multi-step process.

“It’s not traditional monotyping, but I used a piece of Mylar, which is a thin layer of plastic, and then I used chips of card stock. I load them up with ink and then you only have the one plate, it’s got ink in it, which gets directly transferred to the paper, so everything you see on the plate will hopefully, if everything goes well, get transferred onto the paper later,” explained Alexsy. “But again, that’s why it’s called a monotype, you run it through once, all the ink is taken off the plate, and then you can potentially get the second ghost print. So it requires a full-size etching press, or a lithopress, which gives more even pressure than an etching press would. That’s the issue, I’m trying to figure out ways I can do it without a press, trying to shift to potentially making [the prints] up again with screen printing.”

Switching to screen printing would grant her more flexibility in working locations, cut down the cost of overhead and enable easier print production.

“That’s such a big part of trying to work creatively and supporting yourself, is having reproductions available,” said Alexsy. “I’ve been selling postcards, reproductions, just smaller pieces for people who can’t afford the original 400 euro piece, they can have a little fifteen euro one.”

It’s also been a special challenge finding locations in the city where she can have access to monotyping equipment. Alexsy has done some work through the city-funded bbk Werkstätte, but long waiting lists and sporadic hours present obstacles for getting regular work done. Alexsy is on the hunt for her own atelier space, where she could set up shop and produce her art independently.

“That’s something that I have to do, my next priority. If you have a working space like that, it changes the way you think. Having to do stuff at a kitchen table is not…” Alexsy trailed off, shaking her head.

The artist also spoke about the particular appeal of Berlin’s art scene, which offers connections and opportunities beyond the purely creative inspiration of the city milieu itself.

“Back in Detroit, you can’t just really walk around like you can here, the gallery scene isn’t really happening like it is here,” said Alexsy. “Back at home it was more or less making connections academically, which kind of keeps you within academia. There’s so much going on here, and the fact that you can just meet the most random people and experience these wonderful things. I met someone who was on the Baumhaus project, and he invited me to write them and try to get involved. I ended up writing them and they mentioned that they just won a crowdfunding competition, and they’re having their launch event at the FluxBau on the river by Schlesisches Tor, so I’ll be auctioning off my work there—I get half and they get half.” 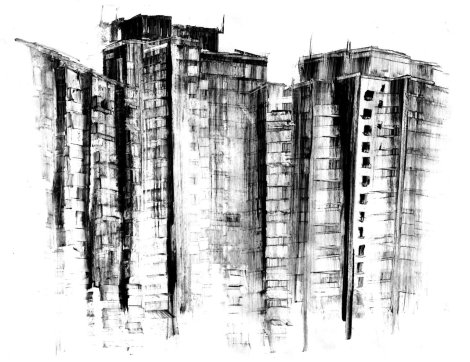 For Alexsy, who spent a year in Berlin as a university student, speaks fluent German and is in a relationship with a German, being back in the Hauptstadt is a kind of homecoming. Here she has a rich pool of inspiration to create her art, both in her current environment and the city’s vibrant cultural past. Among her influences, Alexsy cited Expressionist group Die Brücke, who moved from Dresden to Berlin in 1911 and have a museum in the Hauptstadt dedicated to their creations. Alexsy spoke of her sense of connection to their work.

“A lot of them were architects, but they decided to take that talent, of being able to create realistic buildings, and apply it to these abstractions of people. That really spoke to me,” she said. “The way that they worked, they would just go out to the sea one day, and all four of them would just sit down and paint, you know, bring models out there. It’s just the way that they were happy to be part of life. The fact that they were so happy to be creating—I found that very inspiring.”