Perched over Kottbusser Tor, in a nest of slanting glass, rests a warm, smoky bar called Monarch. The Monarch curves cozily above the street, on eye level with the elevated Bahnhof. A bar and DJ booth give way to a small dance floor, squeezed between a narrow counter with stools and an inviting row of cushions wrapping along the wall of windows.

At the end of this little dance floor lies a little stage, with an array of drums, guitars and mic stands squashed into about two square feet. The band Herrenmagazin is about to step onto this stage. Right now, though, they’re off having dinner somewhere in the vibrant, bustling jumble of Kotti.

When Nomad News last spoke to the band, they were just coming off a tour in cooperation with the acoustic music channel TV Noir, and shared an inside glimpse into the process of recording their third studio album. Tonight’s mini-concert is designed as a pre-release showcase for the album, which drops officially on Friday, March 15.

The club fills up with laughter, the clink of glasses and an ever-expanding cloud of smoke overhead. Taking the stage, Herrenmagazin play a mix of songs off their previous two records, along with selections from the new album, Das Ergebnis wäre Stille. They’re working loosely from a hand-scribbled setlist but improvising as they go and taking suggestions from the lively audience. They exude the relaxed energy of people who have just climbed a strenuous peak and are enjoying standing on the summit. The small space serves to emphasize the power of their heavily guitar-driven indie rock sound and its intensely rhythmic underpinnings. Drummer Rasmus Engler’s beats come across especially strongly in the intimate venue.

The set passes in a whirlwind, with the band pausing only to down a round of vodka shots or banter with the audience. As the mini-show nears an end, frontman Deniz Jaspersen asks teasingly whether they should go through with the whole spiel of leaving and coming back for an encore, or just keep playing. The crowd laughs; sporadic but enthusiastic cries of “Zugabe!” (“Encore!”) burst forth, though the band hasn’t budged from their places. “Reicht mir!” (“Enough for me!”) says Jaspersen, and the band launches into a blistering rendition of old favorite “Lnbrg.”

Herrenmagazin’s new album will be streaming for the week leading up to its release at Visions.de. After the record release, the band will be going on tour in support of the album starting in April and continuing into the summer festival season. 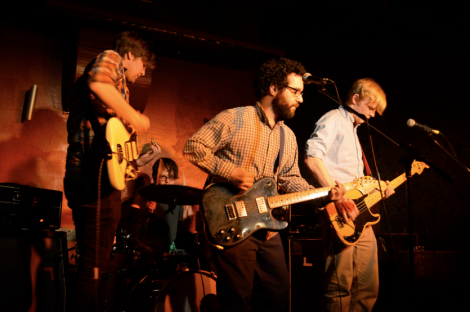 Herrenmagazin play a pre-release show in support of their third studio album.

One response to “Herrenmagazin ramp up for album release”