Danyang is a town of 30,000 people in North Chungcheong Province, South Korea. In front of the Danyang Bus Terminal, there is a big red bridge across a big river. If you cross the red bridge, and drive 20 minutes westward up into the mountains, there is a little agricultural village called Handemy. 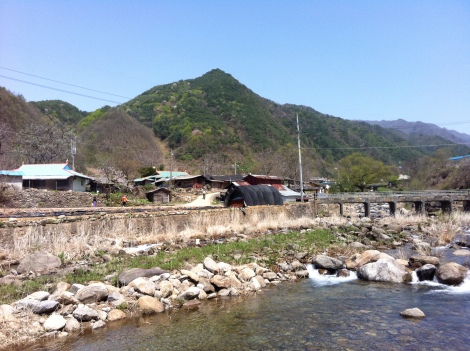 “Little” may not be the best way to describe the village. The village is home to roughly 100 people: Around 50 children, 20 adult staffers, and of course, the elderly “aborigines.” The village is also home to a reputable agricultural enterprise that goes by the same name, Handemy Village, which attracts around 10,000 visitors a year. 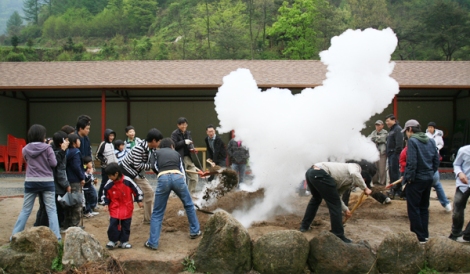 Tourists enjoy a steam pit experience. Afterwards they eat sweet potatoes and eggs out of the steam pit. Credit: handemy.org

Agroeducational means that Handemy Village Co. is an educational facility. This “business enterprise,” as its founder Munchan Jeong calls his education program, began in 2007 when the nearby elementary school was about to close down due to a lack of students. Jeong decided to gather students from all over the country, whose parents were looking for a different, perhaps less competitive, educational environment away from the cities. He started with 18 elementary students in 2007, and slowly built it up to 32 elementary and 14 middle school students in 2013. These students board in the village facilities while attending the local schools during the day.

After school, the elementary level students do different activities, including pungmul, or playing with traditional Korean instruments.

It’s easy to see how Handemy Village creates an alternative, even hopeful, space amidst the generally depressing agricultural scene in South Korea. Here’s the usual romance published in the media: The village was founded in 2000 by Jeong, who used to be a taxi driver in Busan (South Korea’s second largest metropolis after Seoul). He was born in Handemy Village and came back to discover the village in poverty, like many villages in South Korea today. After being elected as the head of the village, he pursued different ways to revive it. Jeong applied for government funding to build roads and reconstruct the facilities; he built a boarding facility and brought youth and vitality back to a once-dying countryside village. To top it off, Handemy recently became the first TÜV-Rheinland-certified eco-village in the world.

Handemy Village Co. is undoubtedly one of the more successful agricultural enterprises of its kind in South Korea. But a few questions remain. Is Handemy truly as alternative and hopeful as its reputation?

1. Is Handemy Village Co. reviving the village it intended to revive, i.e. Handemy Village?
The media rarely makes this point, but “Handemy Village” is not a unified community. There is a clear division between the company and the rest of the village. Most of the villagers are not affiliated with Handemy Village Co., and the most intimate interactions between the “aborigines” and the younger villagers–the staff and the students–are polite “hellos” on the street. Strained or distant relations between an agricultural enterprise and its host community are common throughout South Korea, so how can these relations be improved?

The students walk (race) to the local elementary school in the morning.

The rest of the village usually looks pretty quiet.

2. Do the tourist packages create a lasting impression on the visitors, beyond momentarily satisfying their nostalgic impulses?
Do the programs “Potato Planting” and “Grape Picking” help the visitors look at the Korean countryside differently, other than “Oh how beautiful, look at us being in nature and stuff”?

3. Does Handemy have its own educational philosophy beyond “play?”
Not to underestimate play, but are Handemy’s educational ideas and policies alternative enough to counterbalance the test-centered and competition-driven mainstream education in South Korea? For example, Munchan Jeong has perspectives that are all-too-reminiscent of conservative South Korean ideas about education:  good children are submissive children, who need to be taught what to think (not necessarily how to think). Isn’t this a limited and insufficient approach to education? 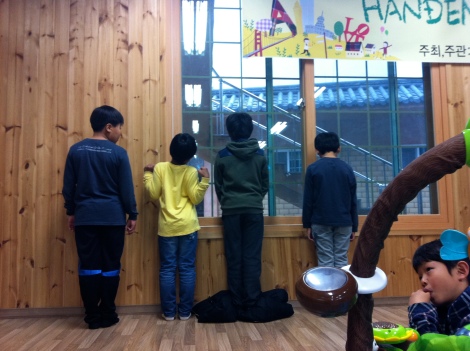 4. What does it mean to be sustainable and local in the age of global capitalism?
One of Handemy Co.’s most important objectives is to maximize profit, invest in new projects and expand its enterprises. But it also wants to be a sustainable local community. Can an enterprise seek profit and sustain its “localness” at the same time?

Handemy Village Co.’s questions seem to be a microcosm of what’s happening in a lot of other “alternative communities” in South Korea. It’s difficult: “Alternative” is a vague label insufficient by itself; the boundaries, functions and philosophies of the “alternative” need to be redefined continuously. Even with a clear vision of an alternative, will these ideals withstand the pressure of different social interests and (lack of) money? Personally, I think it’s particularly difficult to embrace an alternative living in South Korea. Various policies and interests in South Korea are centralized enough to identify a very clear “mainstream.” Money, power and the dreams of young people revolve around big corporations in big cities, not obscure communities; and many people have clear, even moral, convictions about what is conventional and normal.

So, whatever questions you may be struggling with, dear Handemy Village, whiting for trying to break out of the norm!

“Whiting” is how Koreans pronounce “fighting,” which is Konglish for “Cheers!” or “You go girl!” 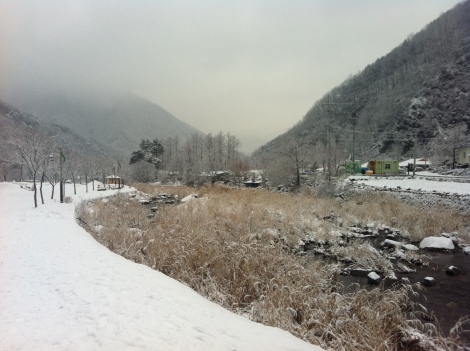